In recognition of Jake’s significant and ongoing contribution to mathematics education through the Mathematical Association of New South Wales (MANSW).

Jake has been a member of MANSW since 2015 and an Executive Committee member since 2017. He has been heavily involved in MANSW’s activities, including presenting at the Annual Conference. Jake has a keen interest in supporting new teachers and spoke at MANSW’s Early Career and Pre-Service teacher SIG meeting this year. He regularly contributes to MANSW’s professional journal, Reflections, and quarterly newsletters and contributed to the development of MANSW’s HSC solution booklets.

Jake is chair of the MANSW Secondary committee. From its inception, Jake has led this committee, whose vision is to represent the interests of secondary mathematics teachers in NSW. In this role, Jake began TeachMeet events, where secondary mathematics teachers from across NSW share innovative and engaging teaching ideas. This included the use of video conferencing to allow participation of teachers from across NSW. Through social media, including Twitter and his blog, Mathematics & STEM education, Jake promotes MANSW and mathematics education. 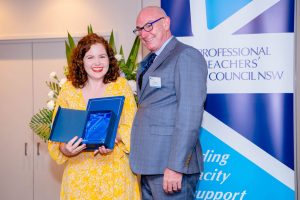 Jemima joined VADEA as a beginning teacher in 2016 and has undertaken the roles of Mentoring/Early Career Support Project Officer (2017 and 2019) and Professional Development Metropolitan Project Officer (2018). In her project officer roles Jemima has been involved in VADEA professional learning and an active contributor to planning meetings and to co-ordinating the program and presenting at the 2019 VADEA Inspire Beginning Teachers Professional Learning Day. Jemima has been a member of the VADEA conference liaison team since 2017, undertaking a number of responsibilities to support the conference organisation.

Jemima has an enthusiastic approach to her emerging professional practice, and has demonstrated a strong commitment and fresh approach to visual arts education through her innovative ideas.

Jemima is an integral member of the executive and project officer team, and has made a significant and valued contribution to the support of visual arts teachers.