This piece celebrates, not only an outstanding NSW teacher, but the pivotal and often undervalued role good teaching plays in the lives of students. The article follows the story of award-winning teacher Eddie Woo from the moment he announced, to his parents’ disappointment, his dreams of joining the teaching profession. Following Eddie’s journey from passionate young teacher to globally recognised, award-winning educator, we learn that a fantastic teacher can mean the difference between a student thriving in a subject or switching off from it altogether. Ed die’s energy and love for mathematics has not only inspired students to want to excel in the subject, but he’s also ignited a fire in some of the best and brightest minds, who now want to follow in his footsteps and become teachers themselves. Eddie Woo is a shining example of why the teaching profession is a cornerstone of a thriving society and I believe this piece beautifully illustrates his impact on both the local and global communities.

How one special maths teacher Woo-ed a nation 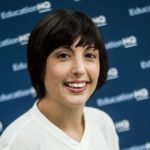 Eddie Woo has become something of a household name in recent months. From his Australia Day address to being shortlisted for the coveted $1 million Global Teacher Prize, Woo has been thrust into the spotlight, a far cry from the life his parents saw for him as a lawyer.

When Eddie Woo first told his parents he wanted to be a teacher, his father assumed it was a joke and his mother uttered something along the lines of, ‘over my dead body’.

With a brother working as a software engineer amidst the dot com boom, and a sister in dentistry, Woo’s parents thought law was a more fitting career path for their youngest son.

“I think for them, particularly for my mum who came from a very well-off background, it was sort of throwing away all of the sacrifices that they had made to come [to Australia].

“It wasn’t just so I would become a teacher, so that took them a lot of time to get over.”

But Woo’s passion for teaching began when he was a student himself, and proved much more than a fleeting fancy.

“When I was in high school I was an army cadet,” he says.

“And one of the things that I really loved doing, was taking the younger cadets and teaching them how to pitch a tent or navigate their way across a map.

“I really enjoyed that, because I love seeing that look in a young child’s eyes when they are faced with a task they think is impossible and then before long you work with them and 15 minutes later there’s a tent in front of them, or they’re the ones that have successfully navigated their platoon across a mountain range.

“I took it for granted that everyone liked that. But all of my friends, they all kind of said ‘man, teaching the younger kids, that’s a job we hate the most. We’ll do anything except for that!’ Because they just found it frustrating.”

Famed for his WooTube videos which have been devoured by maths students around the world, Woo also has a knack for turning maths around in the eyes of students who proclaim they hate the subject, or just don’t get it.

He says the first step towards addressing student disengagement in mathematics, is treating every child as an individual.

“So the first thing I’ve got to do is get to know this child and work out what’s happened, find out what their journey has been and what has caused their disengagement.”

“Because one of the things that I know people are always searching for is, ‘what’s the silver  bullet that we can introduce into every school and it will fix every single problem with our education?’”

“Anyone who works in a school knows that that’s a pipe dream, that that silver bullet doesn’t exist.”

According to Woo, students usually dislike mathematics for a combination of two clear reasons. The first being, that many students find maths as very abstract and disconnected from reality.

“So they’re just shuffling symbols around a page for no apparent reason, according to rules that make no sense, and then, why are we surprised that that doesn’t grab them or engage them?” he asks.

So how does the average mathematics teacher combat this?

Woo says with open eyes, maths can be found in the most unlikely of places.

“Mathematics is around us everywhere,” he says.

“Kids who are very sporty often think of themselves not as very mathematical people, but actually mathematics is everywhere in sport.

“Every young boy can tell you every endless statistic about their favourite cricket player or rugby player.

“When you throw a ball through the air, it perfectly traces out the path of the mathematical object we call a ‘parabola’.

“Mathematics is woven into every aspect of children’s lives and so, if we have eyes that are open to see what it is that our students love and connect with and then find the mathematics there, then I think that’s the first step,” he says.

The other key reason why many students hate maths, Woo says, is simply because they are unsuccessful at it.

“Maybe they missed a whole bunch of school and they don’t understand some key concepts, so they have gaps in their learning,” he suggests.

“Maybe they had a really bad year with a teacher and so they’ve just lost all of their confidence because they were demeaned by someone who just said, ‘what do you mean? Don’t you get it? It’s obvious’

“That’s a crushing thing for a child to hear.”

In these cases, Woo says to remember that all knowledge in mathematics is built on other knowledge that came before, so in essence mathematical learning is like a pyramid.

“If the foundations are weak, you can’t build anywhere,” he explains.

The answer, he says, is rewinding in the student’s mathematical history until you reach a point where they are challenged but can experience success, and then building from there.

“And, once students get a handle on challenging tasks that they can access, they can actually do these tasks, but it pushes them,” he explains.

“Getting that sweet spot is the real key to getting kids switched on, I find.”

When it comes to learning, Woo likes to lead by example.

He truly is a lifelong learner, constantly seeking out new mathematical knowledge regardless of  whether it will help him with the syllabus he  is teaching.

“One thing that I love to say to pre-service teachers is, ‘you can’t take a student somewhere you haven’t been yourself’,” Woo says.

“If you’re not excited and switched on and amazed by learning something new, then how are you expecting your students to do that same thing that you’re not doing?

The position often sees him taking on extra administrative work to free his maths teachers up to spend more time in the classroom.

Not unexpectedly, he also takes responsibility for helping other maths teachers develop and innovate in their practice.

“No school is an island, every school is part of an educational community and as head teacher of mathematics, I’m integrally connected into the entire mathematics education community throughout the state,” Woo says.

He says his style of leadership is built fundamentally on positive relationships.

“So, for me relationships [are] the key.

“Discussions with my colleagues about ‘what’s difficult? What are the challenges you are facing? How can I support you? How can I grow you? How can I cultivate the skills that you need to become leaders yourselves?’.”

Undoubtedly an inspiration to many teachers across the globe, Woo also gets a special thrill from  inspiring some of his students to follow in  his footsteps.

It’s not uncommon for a Year 12 student to approach Woo at the end of the year to tell him they’ve enrolled in a Bachelor of Education, because of the example he sets for the profession.

“Oh look, the number of times that a student of mine has come and told me that they want to be a teacher. I wouldn’t describe myself as a super emotional person, but I’ve cried when I’ve realised some of these people, they are amazing, they’re intelligent, they’re brilliant communicators, critical thinkers, creative – really amazing individuals who really could do anything with their lives, and to understand that they’ve seen education as something that is worthwhile that  just blows me away,” he says.

Woo speaks of a former school captain, who received marks so high she could have gain a scholarship for any course or university she wished.

“She said, ‘I want to go to the same university you went to and teach the same subject you teach because I’ve just fallen in love with helping students learn the way you do.’

Despite being lauded by students, peers and, more recently, the wider community, Woo maintains he’s no different to the many other hard-working teachers out there.

“I wholeheartedly believe that I’m not an exceptional teacher,” he says.

“Anyone who watches the videos that I put on WooTube will see very quickly that they are completely normal lessons it’s loud, people call out, I get interrupted by a student at the door who needs to send someone to the deputy principal, people ask to go to the bathroom, I make mistakes and then I fix them.

“It’s just a normal classroom, and the only reason why I’m being recognised is because I’ve just opened a window.

“I’ve just shown people what happens in classrooms around the country every day.

“I feel really uncomfortable being singled out, because I’m not a singularly amazing teacher, I’m  just a representative of an amazing profession,” he says.

And as for his parents, while sadly his mother passed away when he was only 19 years old, Woo says he’d like to think his dad is proud.

“I think that he is delighted that I’m able to do something that I think matters, and that I’m good at and can make a positive impact on society,”  he says.