This article worked to positively change the public perception of the significance of the often overlooked and undervalued teacher librarians. Furthermore this persuasively argued case for a review into school libraries may have played a part in convincing the Federal government to establish the Inquiry into school libraries and teacher librarians announced in March 2010. That Inquiry resulted in an overwhelming number of submissions that surprised Inquiry convenors.

The initial focus on the construction of 2802 new primary school libraries (403 in NSW) and the refurbishment of another 435 is developed into a cogent advocacy for the vital role that teacher librarians play in quality teaching and learning. Acknowledging the specialist education required to become a teacher librarian Parker boldly questions whether these teachers ought to be paid more for their additional training and management skills. Readers learn of the shortage of teacher librarians throughout Australia and are confronted with the question of how the new buildings will be staffed. Inadequate investment in school library staffing and resources is sustained by compelling evidence. We are reminded that in NSW DET schools these accomplished dual professionals manage their libraries with an antiquated DOS based management system.

Writing on the wall for library revolution 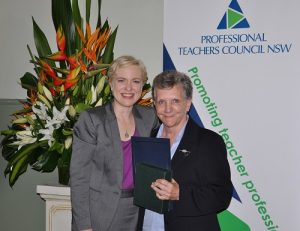 WE can only hope someone knows what to do with that “state of the art’’ library, courtesy of the Rudd Building the Education Revolution, coming to your primary school soon. And more importantly that they have the time to do it. 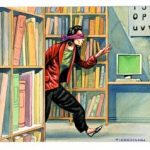 But the sorry truth is not one state or territory in Australia can promise their fabulous new primary school libraries will be run by people qualified to do the job.

And worse most public primary school libraries do not have a full time teacher librarian – qualified or not.

The government is on the right track, I believe, in aiming for a 21st century library in every Australian primary school. But the buildings, technology and furniture are only part of it.

It is the people who run the libraries that make a difference. And it seems we don’t care too much about them.

School librarians today need to be highly specialised experts who can teach children to be critical users of information technology as well as inspire them to be recreational readers. They also need to be skilled managers of the physical and electronic resources of their school – possibly worth hundreds of thousands of dollars.

I believe 21st century teacher librarians can play such a vital role in their schools they also need to be trained and paid as educational leaders.

The NSW Department of Education claims this state is getting 403 new public primary school libraries as well as numerous public school library refurbishments.

And that is because no-one is keeping tabs. According to The Hub, a teacher librarian advocacy group, there has not been a review of school libraries since the Fenwick Report in 1966. They have a petition going at the moment to get the federal government to review school libraries. See it here.

So we have no idea at present who is doing what. In fact there is no national agreement or set standards for Australian school libraries or the role of teacher librarian.

Frankly that is extremely odd when we have a federal government throwing $3 billion at schools for projects involving libraries and seems obsessed with evidence based reforms in education.

A recent national snapshot by Edith Cowan university, the Australian School Libraries Project, found 50 per cent of the 863 schools across the nation (of the around 10,000 schools in total) who participated in the online survey did not have professional staff or a full time librarian. Unfortunately only 136 NSW schools participated in the survey.

At least every NSW high school has a full time teacher librarian, qualified or not, no matter how small they are. On the other hand, according to the ASLP survey, 95 per cent of schools surveyed in the Northern Territory have no school librarian.

Meanwhile NSW public primary schools need about 550 students before they are allocated a full time teacher librarian. Most struggle through with the library staffed only two or three days a week .

Newly appointed teacher librarians in NSW public schools now have to have the extra extra degree, diploma or certificate in librarianship or promise to start one in their first year. However teacher librarians are only paid normal teacher rates. They are not paid more for the extra qualification.

To add to the burden NSW public school libraries are still labouring with an old DOS system of managing their data bases because our government is too broke or too incompetent to update. But that is another story.

Of course the big fear is in a few years without proper staffing and support some of these new primary school libraries may be subsumed for other uses. In cash-strapped NSW public schools some staff rooms, kitchens and woodwork rooms are counted as classrooms – so this is a real possibility.

Against all odds could we hope NSW might review their public school libraries and find out what the hell is going on? Here is a chance for the Rees government to set a standard and lead the way.